John W. Dreste, Partner, concentrates his practice on complex commercial contract litigation, largely focusing on the fields of construction contract law, suretyship, fidelity, environmental law and other areas impacting the surety, fidelity and construction industries. His practice, though litigation oriented, involves extensive claims analysis and investigation and includes negotiation, mediation and other informal methods of dispute resolution. Additionally, he serves as a mediator and arbitrator through the American Arbitration Association in construction industry disputes.

In addition, John has lectured, and has authored various articles, on subjects pertinent to the surety and construction industries, most recently focusing on issues relating to mold in construction settings, and regularly contributes to various publications.

John has handled a number of high profile matters in which Ernstrom & Dreste has been involved, including numerous multi-million dollar claims asserted by and against clients on major construction projects.  He has also handled many cases in which our client was in competition with the Internal Revenue Service or an estate in bankruptcy for project contract funds. These actions resulted in the preservation and/or payment of contract funds to our clients or other appropriate project-specific recipients. In a subrogation/salvage setting, John successfully pursued a “Type II” differing site condition claim that resulted from an encounter by the contractor/principal of various toxic substances during the boring of a tunnel underneath a river. He also regularly defends sureties on issues involving bonds that are fraudulently induced or are otherwise unenforceable.  Also, John represents various Brazilian corporations in matters that have involved railroad and oil production projects, and publicity rights, in the United States and Brazil.

John Dreste regularly counsels clients and handles contractor work-outs and otherwise “troubleshoots” potential defaults or claim situations. Notable efforts have included multi-million dollar financial work-outs involving troubled contractors, sureties and banks. As a firm, we have found that prompt, aggressive and independent early investigation of problems will often mitigate the severity of any loss which may ultimately be incurred. In connection with these efforts, he has dealt with environmental and other analyses as may be required to protect our clients’ interests.

The above illustrations are merely representative of matters or issues handled by John. He has represented numerous sureties, contractors, owners and others requiring expertise in complex commercial contracts and disputes. 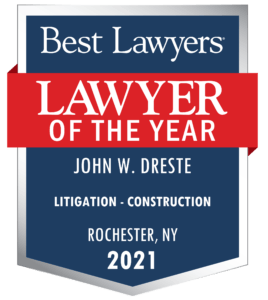