Brian approaches his practice with the singular underlying mindset that his job is to offer the best solution to his clients’ issues, within the confines of the law.  With that mindset, he understands that there is not one singular path to achieving a desirable result for a client—good results can be achieved through judgments in state or federal proceedings, negotiated settlements, or alternative dispute resolution forums.  Developing creative and cost-effective solutions to his clients’ legal needs is at the forefront of Brian’s style as an advocate and counselor.

Brian holds a Juris Doctor degree from Case Western Reserve University School of Law, where he was an Associate Editor of the Canada-United States Law Journal and a regional semi-finalist on the American Bar Association moot court team as a writer and oral advocate.  As a Rochester native, Brian is a proud SUNY-Geneseo alumnus, where he earned a Bachelor of Arts degree in political science, magna cum laude, and completed undergraduate study in three years.  At Geneseo, Brian was a member of the Pi Sigma Alpha Political Science Honor Society and was the Vice President of the Political Affairs Club.  Brian is also a Fourth Degree member of the Knights of Columbus, where he volunteers his time for various charitable causes. 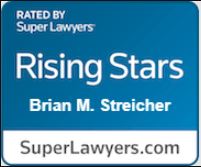